day 4 -- in which we almost have our kidneys stolen, and find a demon horse.

SO. Somewhat belatedly, here goes my description of Penang.

We woke up after the trip to KL feeling less than excited about another excursion.

Docking was again a high-light of my day, I loved watching our massive ship glide gently in and was super-impressed by the skills everyone displayed. 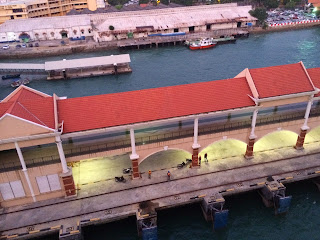 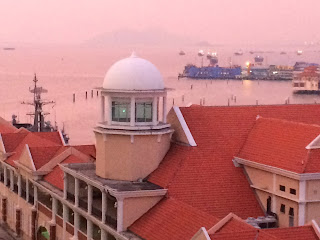 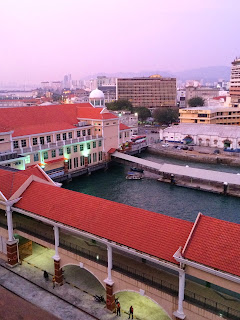 I had booked us (Fabio and myself) tickets on a bus tour of markets and things, but we didn't want to go so we cancelled it (didn't get our money back, either) and had a leisurely breakfast and relaxed a bit.
One of my sisters and her husband had booked some spa time, and my other sister asked us if we wanted to go for a walk off-ship.

Feeling brave, we decided to fore-go any kind of arrangement or organisation, and wing it! After KL, where there were about a million taxis waiting outside the terminal, we thought it was a pretty safe bet that Penang would be no different.

Well, it was different, in that there were so many of them, and they were so persistent, we nearly had to beat them off with a stick.
They tried desperately to convince us that there was nothing to see locally, and we should go for a nice, long drive into the city.

Once out of the terminal, we just started wandering. The architecture is GORGEOUS.
See? 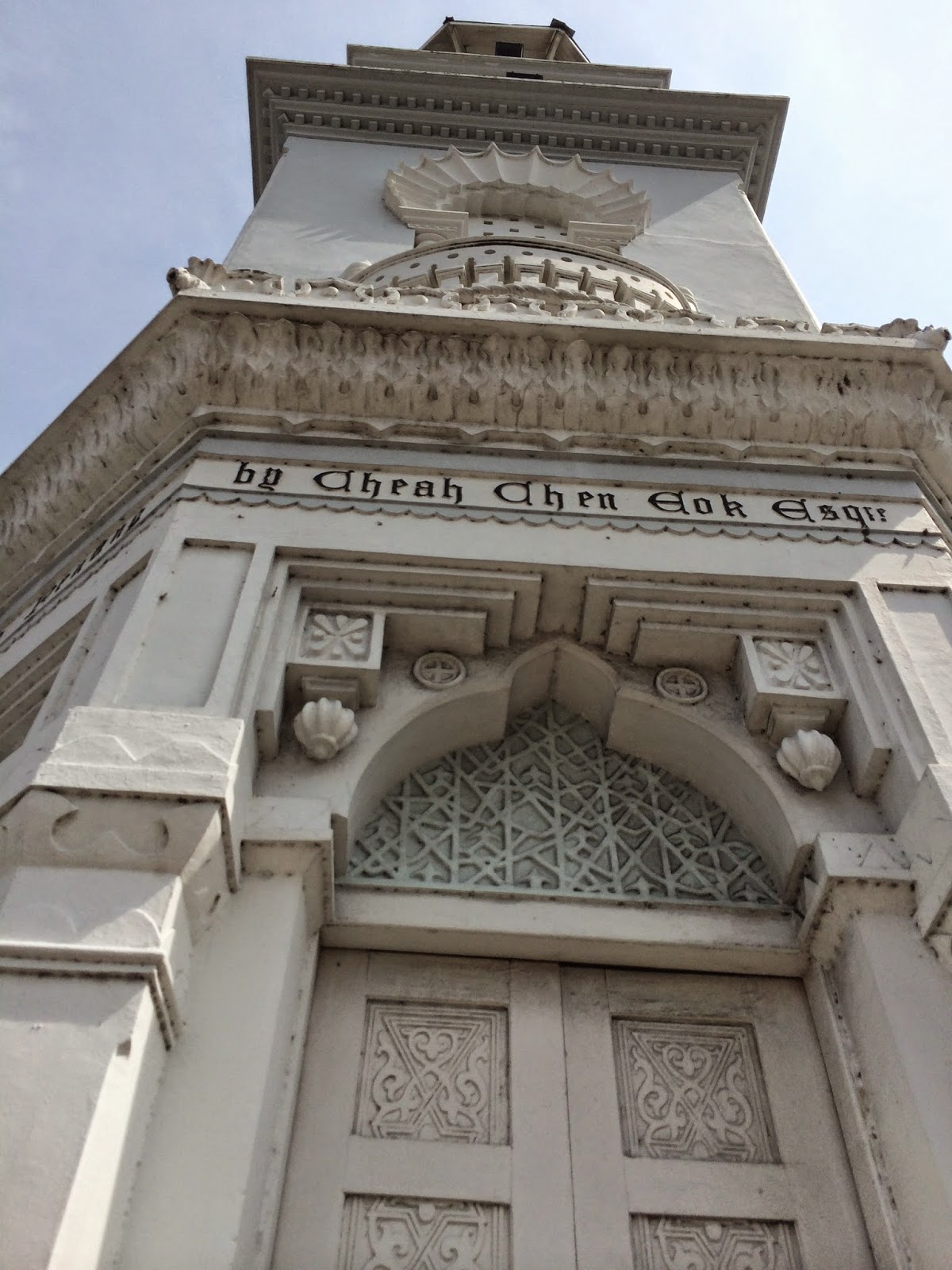 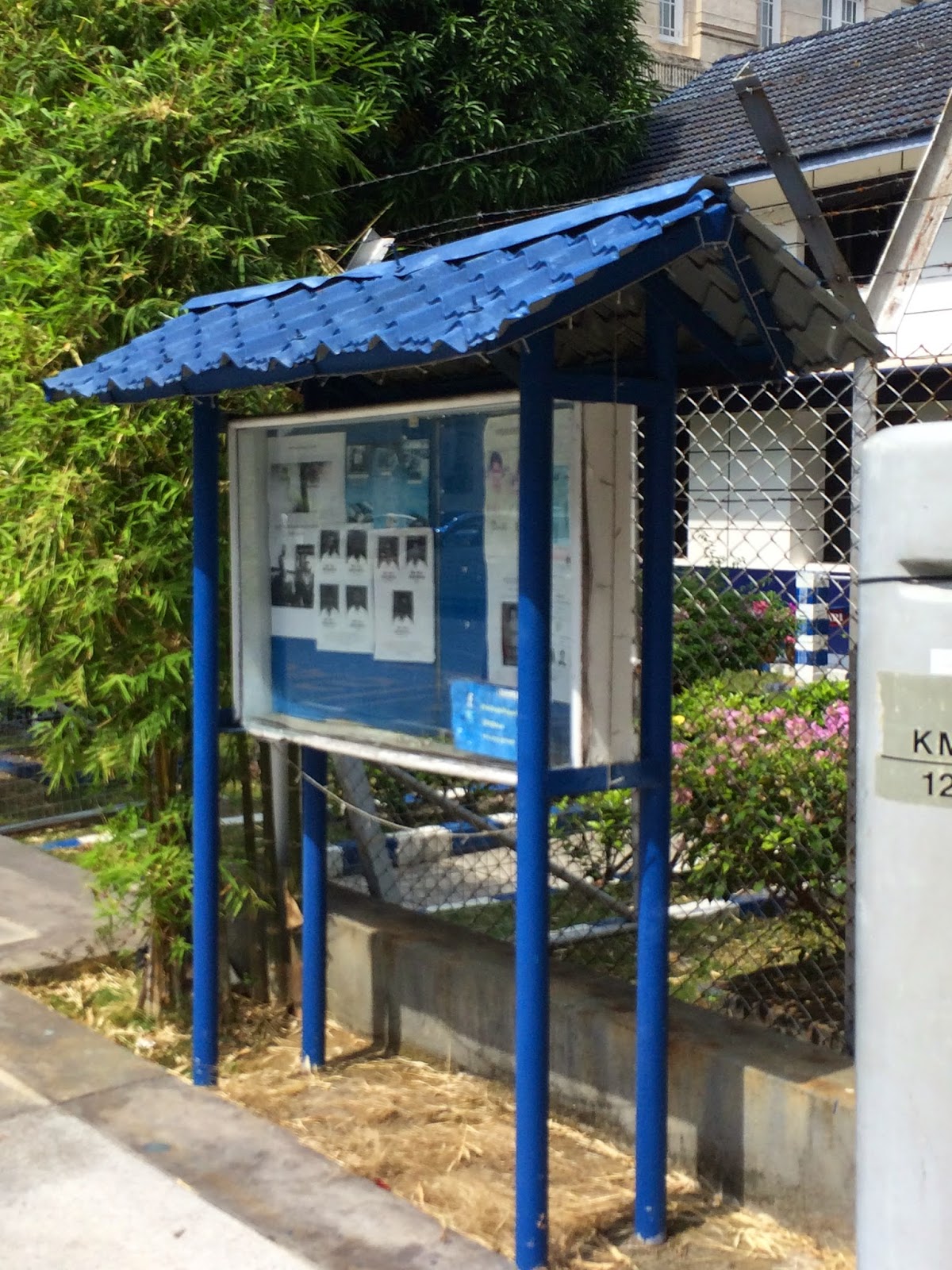 That little blue thing? I was very taken with that. It's TARDIS blue, and super-cute, so I was taken aback to discover it's a list of WANTED BY THE POLICE people! 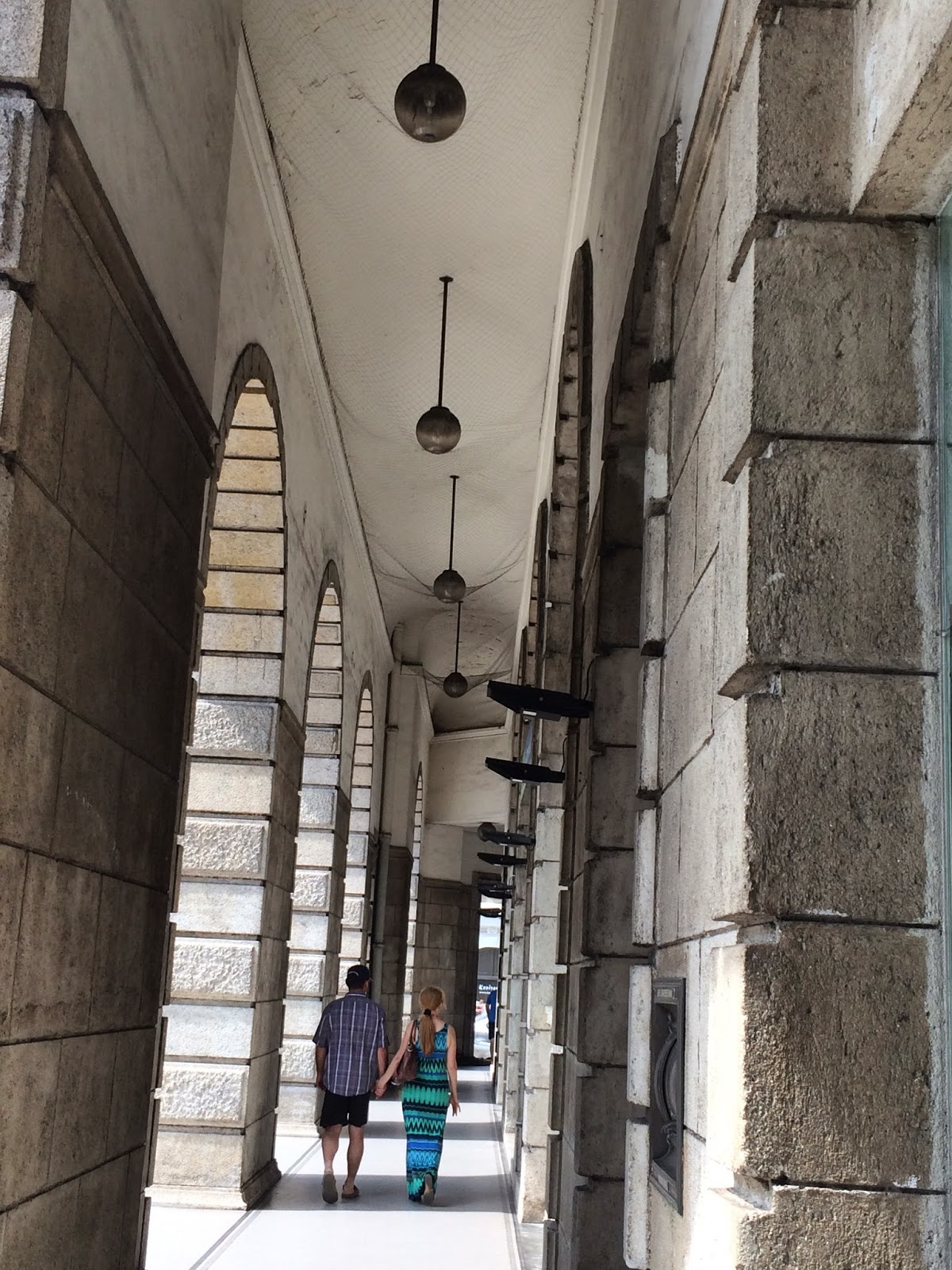 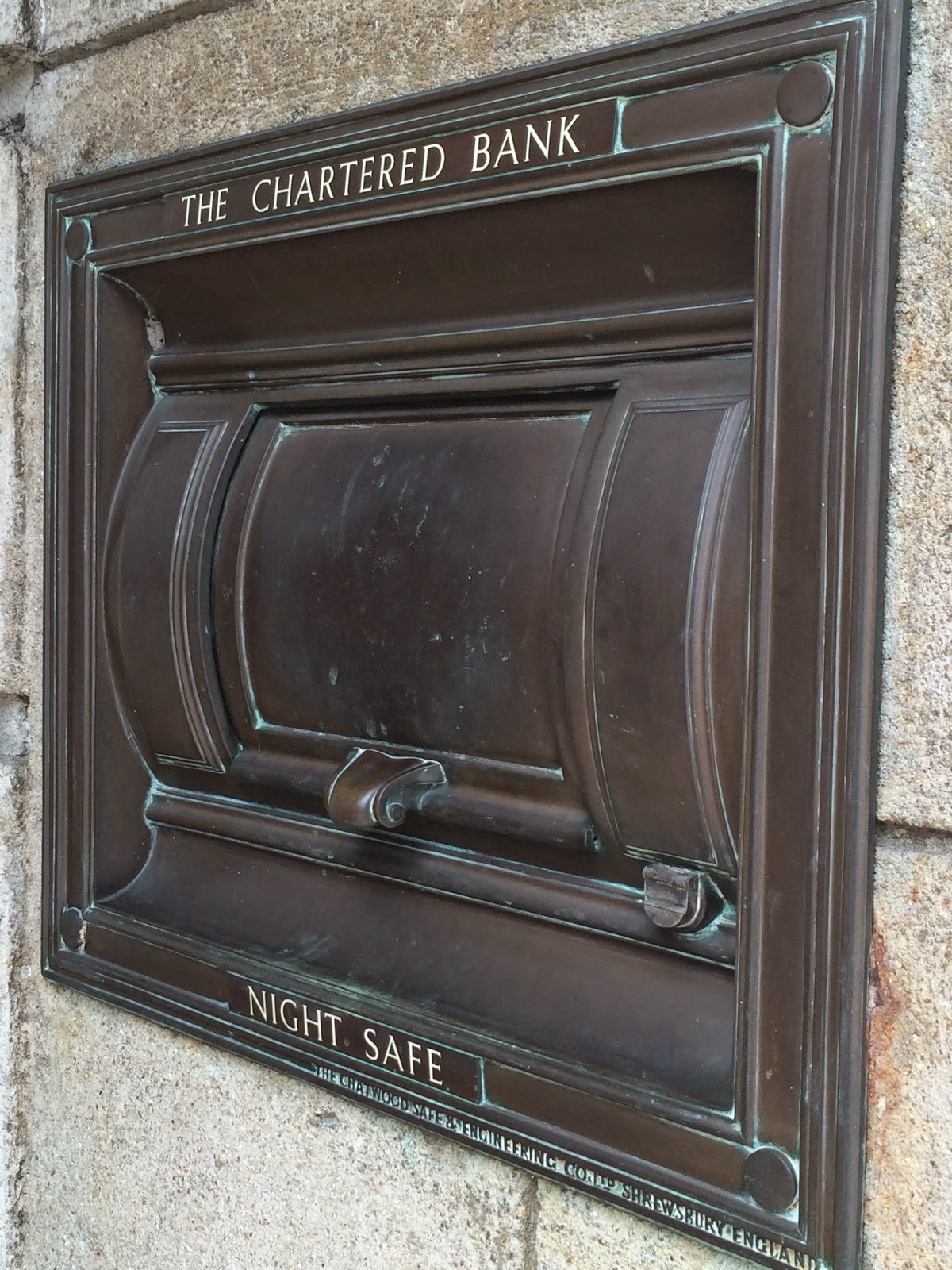 An early attempt at an ATM? deposits only, I imagine.

We found a place for lunch, and the food was mostly good. My sister's toasted cheese sandwich was flat-out WEIRD -- bread like cake, thick and sweet -- she tasted it but couldn't get her head round it. I had chips. Yes, I am THAT tourist.

The girls needed a wee walk after lunch. There was a toilet sign on the wall at the back so we followed it through a door, down a long dark passage past - and through - the kitchen area and storage rooms, and some unidentifiable dark rooms full of busy people, and I started to make comments about having our kidneys stolen.

Eventually, though, we found ourselves in a sunny courtyard with a toilet block... 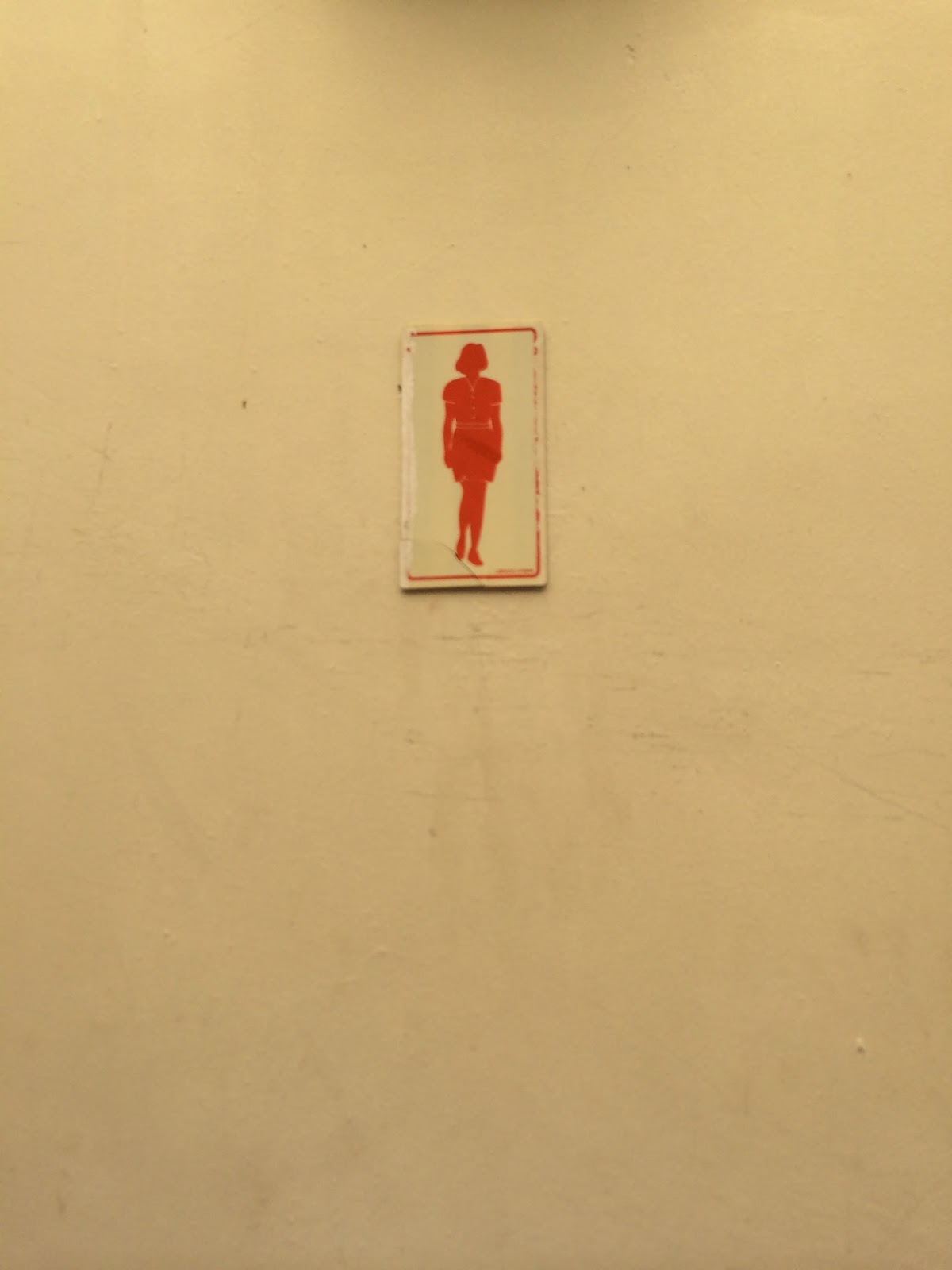 and a wooden horse, 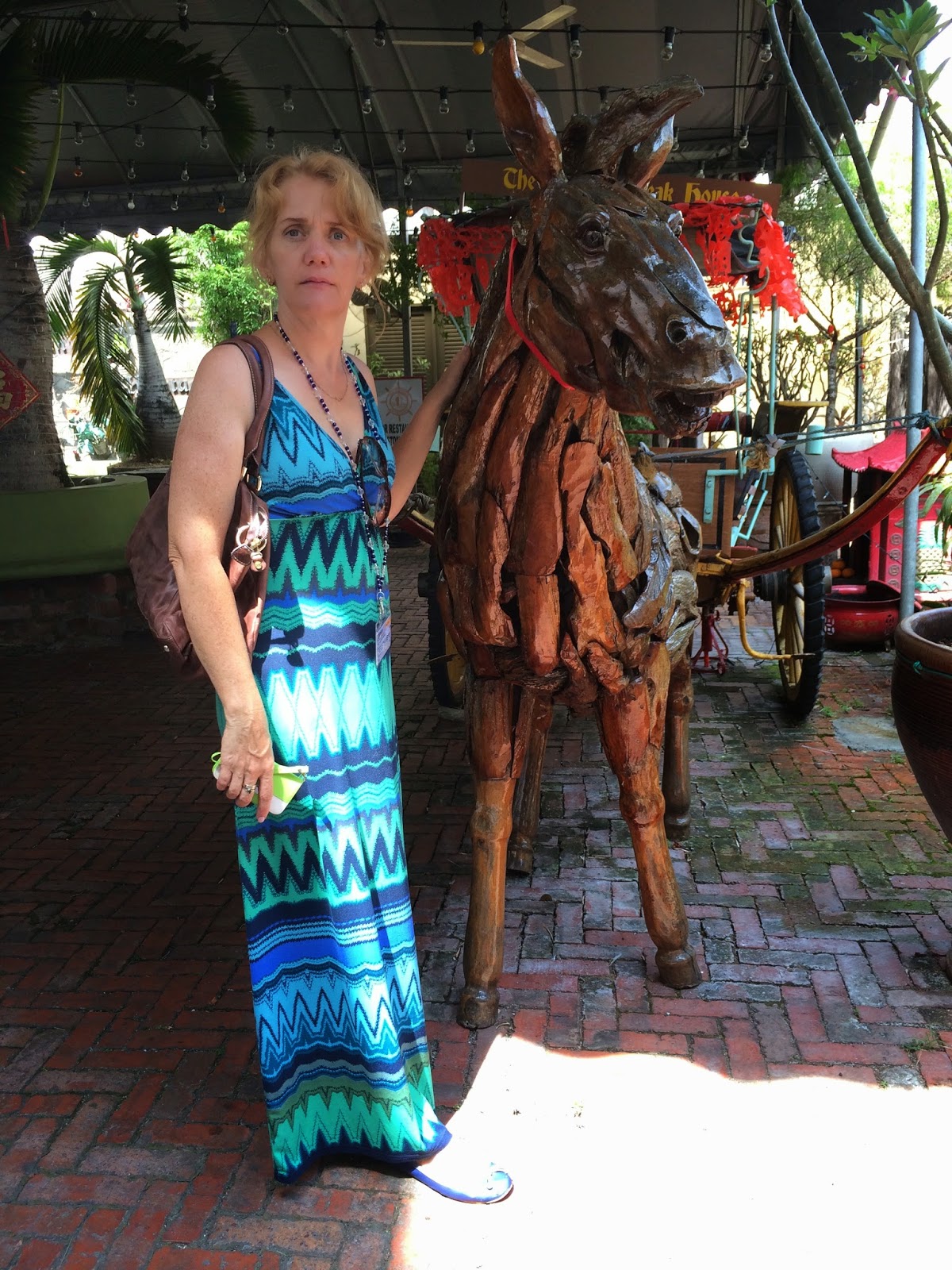 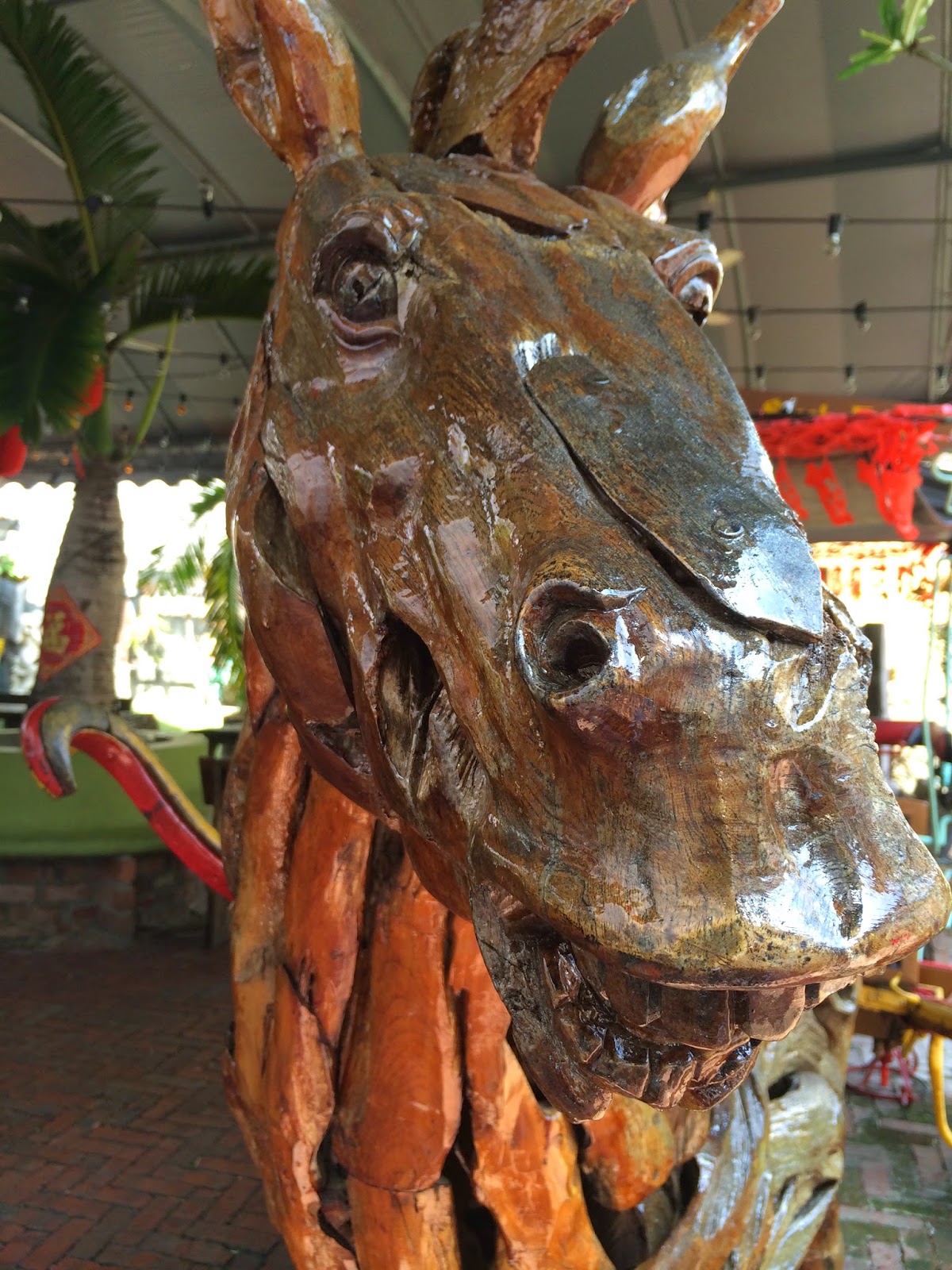 Not creepy at all. Chinese New Year decoration. Mmm hmmmm.

We found ourselves in a very Indian area, with lots of SARI SHOPS!!

Our eyes lit up like pinball machines! (well, my sister's and mine, at least)

BIL headed back to the ship, leaving his wife, my sister, in my husband's charge. He was like a border collie trying to round up chooks, poor man. We dived in and out of shops, staffed by mysterious Indian gentlemen, and eventually found a nice sari for my sister. They altered it for her in about 15 minutes, on the spot, and we also got some gorgeous jewellery in a lovely shop run by a tiny Indian lady who reminded me of my nana, only abut half the height.

I, alas, couldn't find anything I liked. Too fat, too big in the boobs. I needed the looser style of sari, but it was so hot and getting later, and we decided to make our way back to the ship. 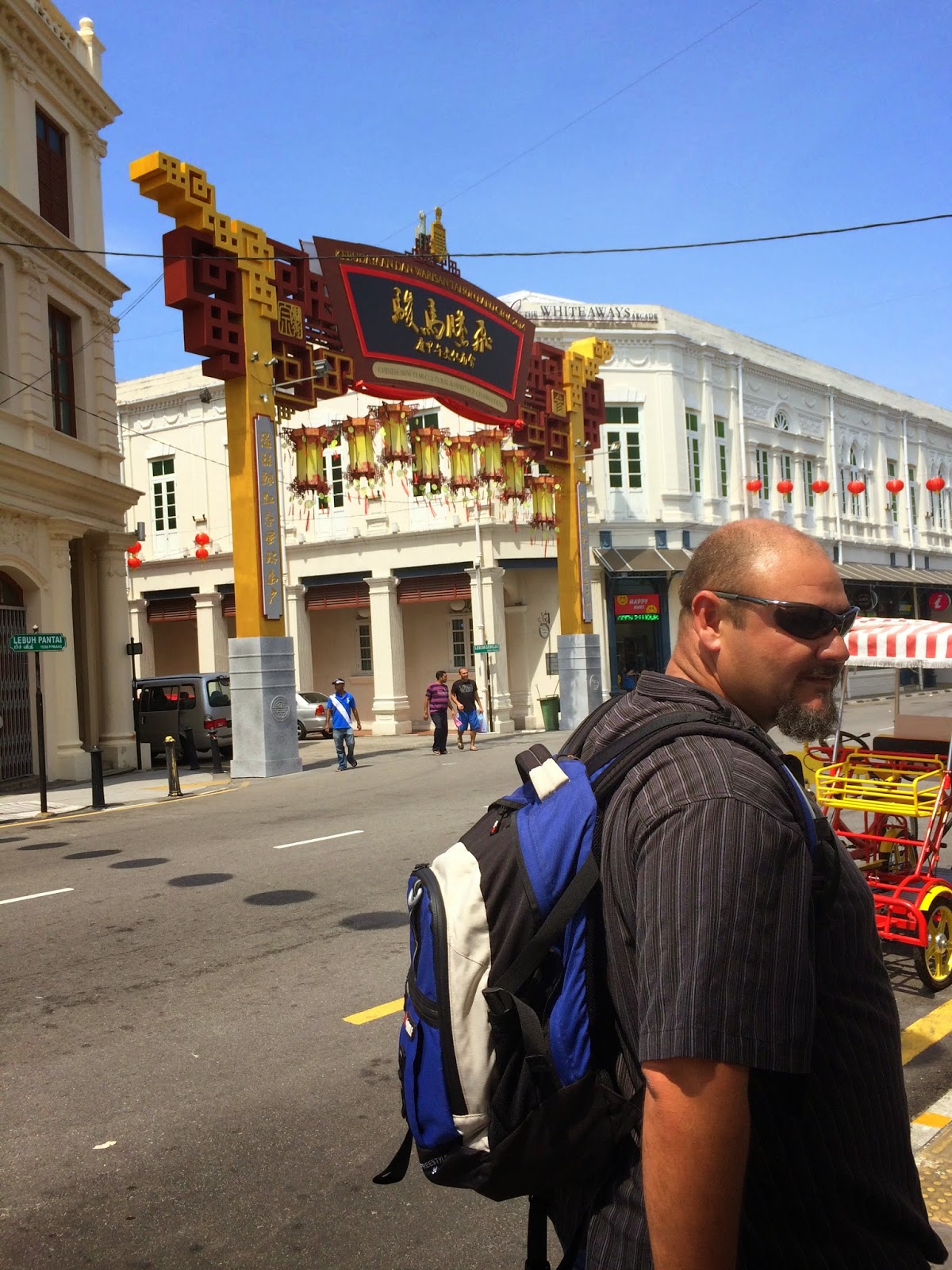 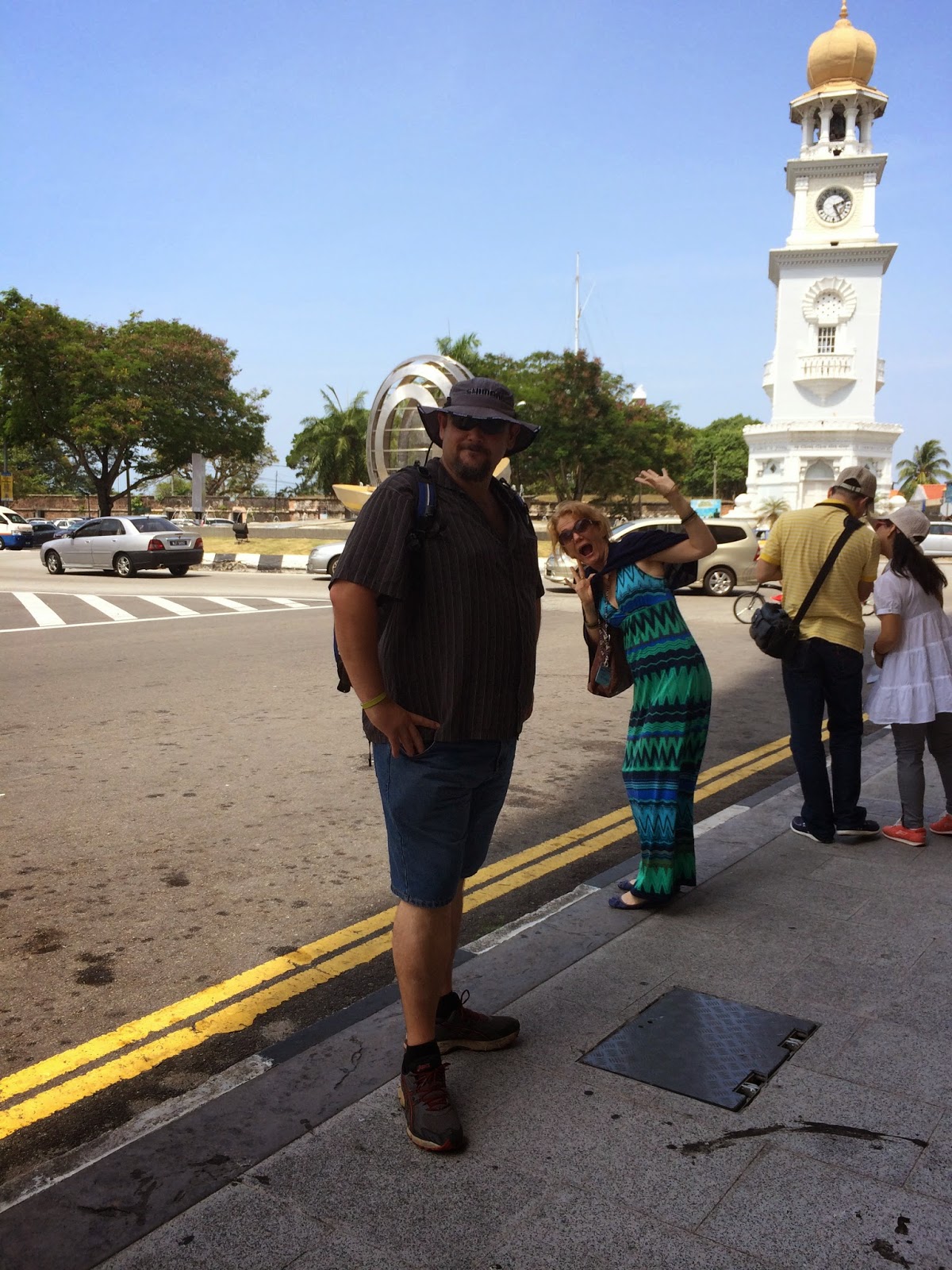 Once back on board, we had a shower, a few cool bevvies, and took a stroll round the ship.

It was a tad breezy. 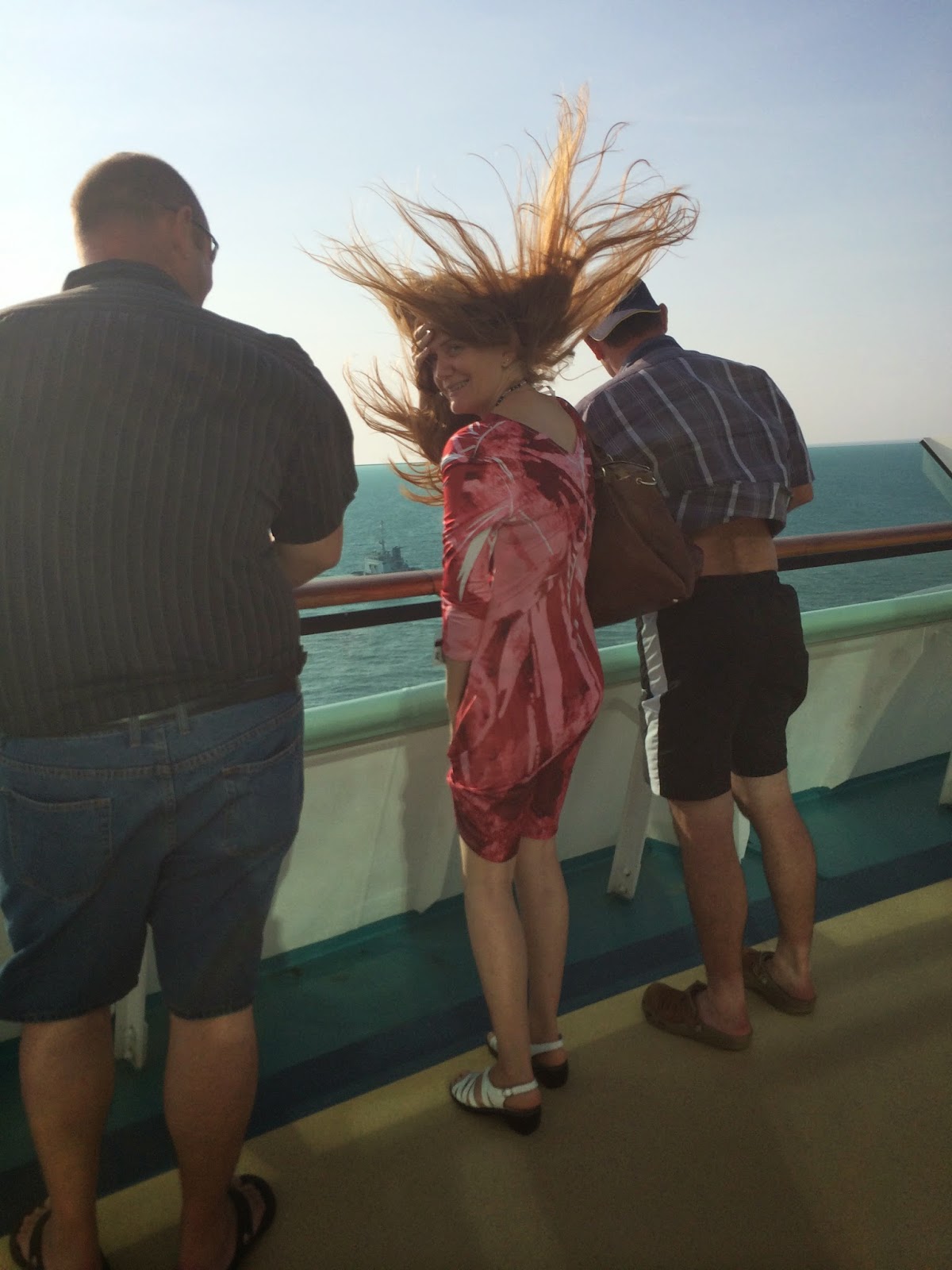 
And, it has to be said, my sister looked amazing at dinner that night! 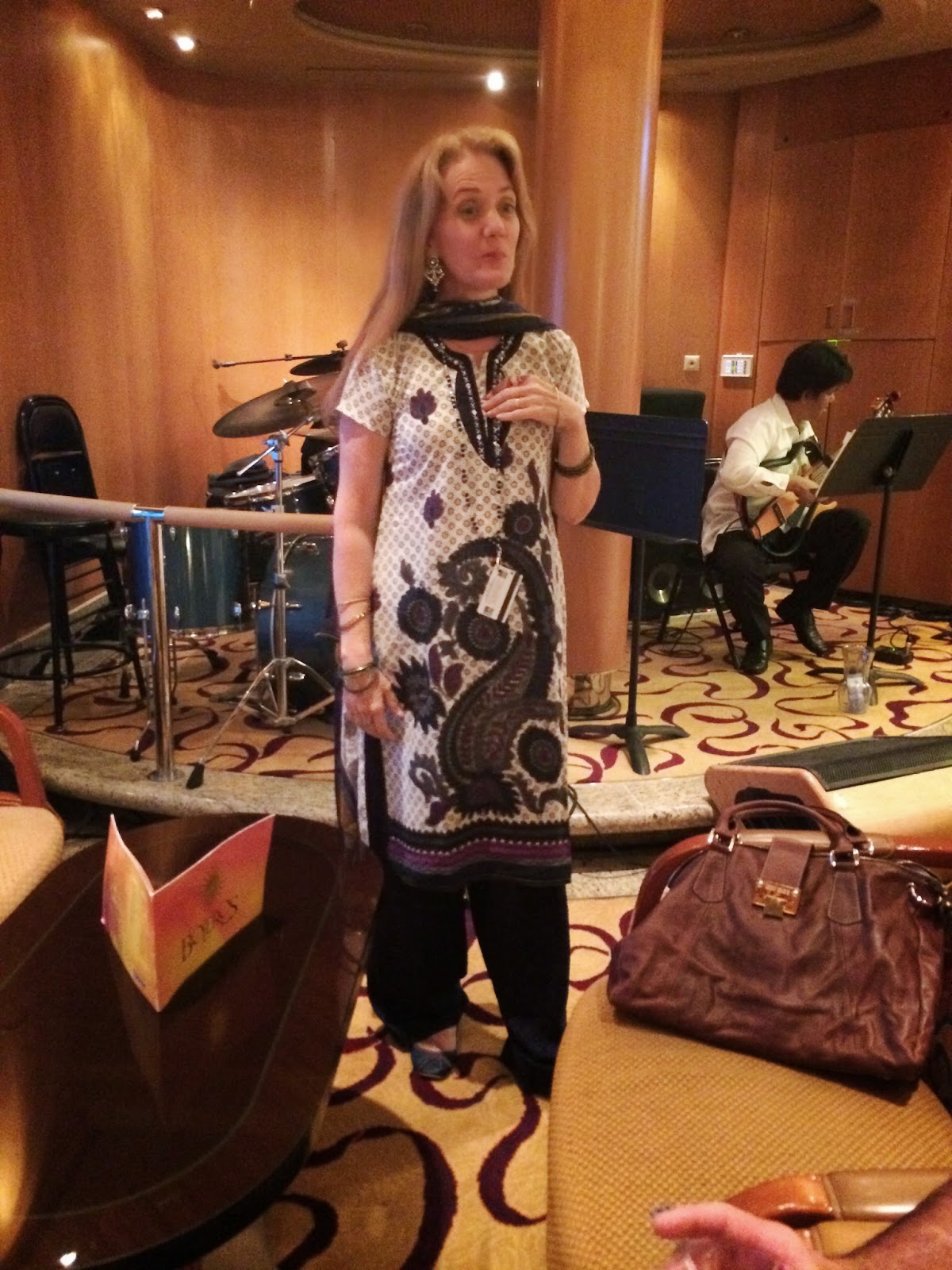