Did I just hear the sound of hundreds dozens several mouses clicking away?

NO WAIT! this isn't as bad as it sounds. And there are no photos, I promise. Not of testicles, anyway.

When I first proposed this blog post title to my husband, his reaction was -- well, gratifying in a weird kind of way. Heh. I do like to keep him on his toes.

And, of course, none of us SERIOUSLY like testicles, do we? Girls, I mean -- fellas seem pretty keen on them for some reason.

But I do like one thing about testicles -- TESTOSTERONE.
Yeah.
I'm a girly girl, and I like manly men.

It seems to me that there's been a concerted move right across all forms of media over the last decade or more, to 'girlify' or downplay the role and reality of men.

I get that fashion changes, but once, hairy-chested men were all the rage.
Who can ever forget that eye-searing Jack Thompson centrefold? (if you've never seen it, be grateful.)
Or this iconic 'spread'? 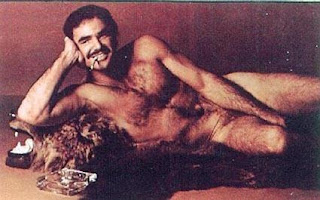 Yes, indeed, ladies, once upon a time, Burt Reynolds was hotter than your nanas' flannie sheets.

Now, it's all about the waxing and there's not a chest hair to be seen on any model or actor.

Another example -- think about all the popular TV shows. How many of them feature a smart, manly man who can think for himself, without farting or ogling female body parts, and who doesn't need a woman or some smart arse kids to rescue him every week?

TV ads -- when was the last time you saw an ad for a 4WD that showed a MAN driving?

Even my favourite serial killer, Dexter, came under constant criticism from his wife and sister for being a bloke, and doing bloke stuff. What the...?

I like it that men are different from women.

I like the way they think, I like how their friendships have a completely different set of rules from female friendships, and I generally like their conversations a lot better at a barbeque!

I like that my man smells like a man, and works a man-job, and yes, sometimes he farts and it nearly kills me, but he also holds the doors for me and warms my towel in the dryer in winter, and if he wants to go fishing on the weekend, that's OK because I'm not going to make him choose curtain fabrics with me instead.

I don't need him to be another girlfriend (one with whiskers and big feet).

I really do get it that women have had a hard slog to try and balance the 'battle of the sexes'. I know I'm standing on ground that was broken for me by suffragettes and feminists whose names I don't even know, and I'm grateful for the contributions that they've made to our lives.

But I don't think that, as a society, we have to discount the role that men play in order to elevate the status of women.

As a mum of 4 boys, I'm very conscious of teaching them that it's OK for them to be blokes. I don't want any of them to grow up thinking that they're unacceptable by acting true to their nature.

There's a great post on this, written by Brent Riggs. He says it all much better than I have, and if you have a minute, hop over and have a look, it's only a short post.

And please, let me know what you think in your comments.