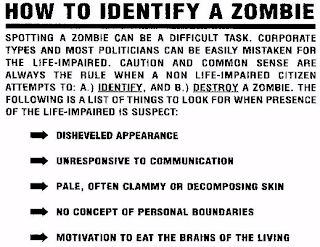 Some married couples sit around in the evenings, discussing the mortgage and who's picking the kids up from school tomorrow.
Not us.
Fabio and I have been updating our Zombie Apocalypse Survival Plan.

I can't tell you what it is, because frankly we don't need anyone stealing our awesome Plan and then having to compete with them for resources, so you'll have to think of your own Plan, then tell it to me, and I'll see if ours is better.

(I know lots of you haven't bothered to think of a plan, and to be honest, that's just fine with me too. You'll be eaten and we'll be getting away.)

Fabio had to have a couple of shots at it. One of his ideas was to move us out into the wheatbelt of WA, so we could see anything coming -- but I pointed out that zombies come at NIGHT so you CAN'T see them, and you're better off in a place with access to WATER and SUPPLIES, and told him to Plan better or I'd have to remove him from the Planning Committee.

So then he came up with a Really Good Plan, part of which involves stealing a 60 foot motorboat.

I asked him if he knew how to drive one, and he said "Enough."

He looked at me kindly.

"You can't RUN very well, either," he said, "so we'll take our chances with the yacht."

My amendment to his Plan is to grab a bunch of people from our karate class. You should SEE some of them do a roundhouse kick!