I know you've seen the kerfuffle about Angelinas' leg. Joke, staged PR event, rare slip-up, call it what you will, her pose got all the attention at this years' Oscars, sparking a viral meme and this photo appeared almost immediately. which kind of took the attention away from this: Look at her arms.

She is almost skin and bone. Her elbow is the largest part of her whole arm.

I'll confess now, I have a girly crush on Ange. (only partly because of Tomb Raider)
I think she is honestly one of the most beautiful women alive, but this skeletal frame is ugly.

It looks unhealthy, physically and emotionally.

It sends the worst kind of body image to women and girls everywhere.

This is how she used to look 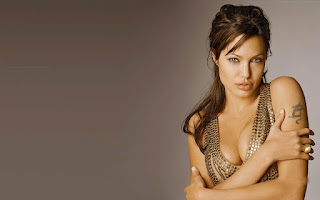 Was that not beautiful enough??? Do you have to look like a bundle of broomsticks to be acceptable in Hollywood?

While looking for an image of Angie Before, I found a story expressing concern at her figure. You can read it here.