It's all over the news this morning -- Barack Obama supports same-sex marriage, changing his stance over the last few years.

I'll be honest -- the very thought used to make me feel uncomfortable. And I don't know why. Possibly years of church teachings, possibly because it's something 'new' and I'm not one who embraces change.

And this despite knowing gays, willingly choosing them as friends and embracing those who are related to me.

So why I thought the world might end if they got married I don't know.

You know what changed my mind? people speaking truth. 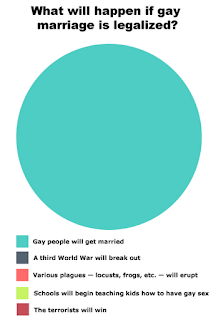 In all honesty, straight people aren't so good at marriage that it should belong exclusively to them. How many straight couples do you know who have divorced, who have uncomfortable marriages, who bitch and snipe at each other instead of building one another up?
It's not like the institution itself is under more threat.

So it must be people who feel threatened. And we need to ask ourselves why?

This is what the Bible says about love.

Love is patient, love is kind.
It does not envy, it does not boast, it is not proud.
It does not dishonor others, it is not self-seeking, it is not easily angered, it keeps no record of wrongs.
Love does not delight in evil but rejoices with the truth.
It always protects, always trusts, always hopes, always perseveres.

If two people love each other like that, then let them marry.

I've heard all kinds of reasons against, like
- polygamy will be next (what, you can't say ONLY TWO CONSENTING ADULTS CAN MARRY ?)
- think of the children (if same-sex couples can adopt children, isn't it better for the parents to be married?)
- it threatens marriage and families (how?)

None of it makes sense to me.
If my gay friends marry, it DOESN'T AFFECT MY MARRIAGE. In any way. Nothing happens to me at all. Nothing. I don't even have to go to the wedding if I don't want to. (though I would. I LOVE a wedding, me!)

The only proviso I can think of is that no law should force anyone in ministry to marry a couple if it contradicts his or her belief system.
And that's it.

Now how about you? What are your thoughts?