This post has been percolating in my head for a week, or more -- and what led to it was swimming lessons.

There I was, at the pool, doing VacSwim, surrounded by tweens in bikinis and boys in boardies, and in the middle of the crowd was a gorgeous girl, looks to be somewhere between 12 and 14 (I can tell with certainty anymore), wearing a full swimming costume.

I mean, ankle length leggings, and a long-sleeved dress-type top. Clearly it IS a swimming costume, just not the kind you would normally see (at least, not here).

And it got me to thinking, along two different lines.

Firstly, I'm not a fan of this look: 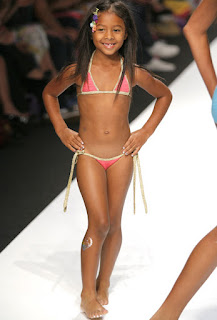 My daughter won't be wearing a bikini while she lives under my roof, and luckily at this point she's CHOOSING shorts and rashies (she's 8) rather than skimpy bathers.

It seems to be that many bathers are designed to point out the tiny areas they're covering, rather than offer any kind of female modesty or dignity, but as long as it's not MY daughter, parading her bits, I remain only slightly disguntled by the whole thing. 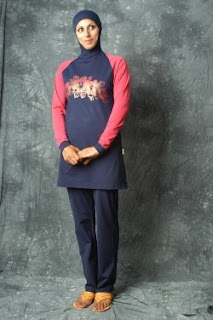 I have friends who are Indian. I know many Indians are shocked at the 'looseness' of Australian women. They are quite disgusted by Western clothing and choose to dress more modestly, and I understand and appreciate their point of view.

I also know that some cultures dress their women in baggy, hot, ugly clothing as a form of imprisonment, and don't be rolling your eyes, because it's true.
They (the men in charge) believe that all men are rapists and savages, and that women will fall or allow themselves to be tripped at the slightest provocation.

I think it's sad (and worse) that they have such a dim view of Western men, because I truly believe that most men don't think about raping and pillaging the first available woman much at all.
Most men don't walk around with a permanent hard-on, looking for an excuse.
Most men will ogle a pretty girl in a bikini, or a pair of jeans, or even a black sack if they can see her face -- but that's because their brains are hard-wired to notice women.
It doesn't mean they're going to tear off her clothes and have her on the spot. 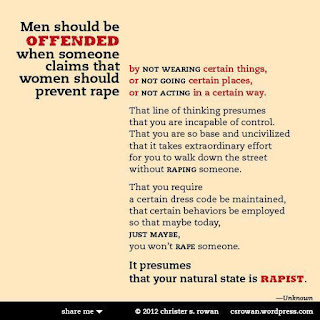 It added to my confusion.

Are covered women being modest? or imprisoned?

What do YOU think?