I was thinking about marriage today.

Not my own, for a change, but marriage in general, as an institution.

And I wondered, when did people start getting married? I mean, it's been happening for a long, long time, and in most cultures throughout history.

Way back in the mists of time, marriages were arranged by menfolk for the purposes of expanding families, acquiring land, and for political reasons. Women had no say in it, mostly, although some cultures did grant equal rights to women as far as land holdings etc went.

(actually, I know a couple whose marriage was arranged by their parents -- they've been happily married for maybe 20 years now? and they say they can't imagine marriage being left to chance!)

But I started imagining a time further back than that -- say, caveman days. Marriage then would most likely not have been for romantic purposes, but more about a 'don't touch my woman' arrangement between men.

I wonder if the women got any say in it at all?

And how did the idea of a ceremony evolve? I imagined a simple statement in front of the tribe.
"Her mine! YOU! don't touch!"
Romantic, eh?

Because, while the times may have changed, humans haven't changed THAT much. Most of us still look for the same things in love and marriage that we always have - security, respect, nurturing, that intangible feeling of belonging to someone ....... and you don't often get that at the end of a club. 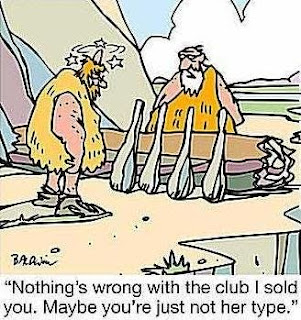