So, yesterday we took the kids to the Beachtown Show, where we patted alpacas, ate hot greasy doughnuts, investigated tractors and saw a ram with enormous knackers.

Like this. Only grey. (the ram) (and the knackers) 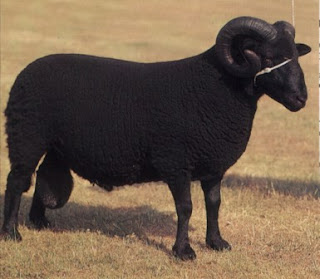 Doesn't that make your eyes water? (and look, his knees are buckling under the weight)

We saw electric bikes and Fabio took one for a spin. We didn't buy any though -- $1700 is why. The hefty pricetag doesn't stop me from wanting one.

The Princess got a Barbie showbag with a big silver tote, 4 nailpolishes, 4 lipglosses, a brow kit, a hairbrush, a makeup bag and a diary. It's cute and it's keeping her very busy.

Mr TenInACoupleOfWeeks got a gun that fires pingpong balls across the room and it's keeping him very busy.

He didn't get to enjoy it till this morning though because we foolishly let him ride on the SuperDooperMegaVomiterator and he was DREADFULLY sick, couldn't even walk afterwards, and stayed that way for the whole afternoon.

You may feel free to nominate us for Parents of the Year.

We found a fudge stand -- and I can't resist fudge -- so we bought me some creme brulee fudge and some nougat for us both. Last night while reading in bed Fabio thought a little nibble of nougat might be in order, so he scratched out his nougat brick and prepared to open it.
But the nougat was determined not to be eaten and defeated all his attempts to tear the wrapping.
After a minute or so of cellophane rustling he managed to tear off a piece the size of a pencil shaving which was only outer wrapping anyway, and he was reduced to gnawing his way through the plastic, but it came loose in tiny eyelash sized bits and I'm not kidding, it took him about ten minutes to open the thing.
By which time my stomach was aching and my glasses had filled up on the inside with tears of laughter.

He enjoyed it eventually though. And the good part was that he worked off a heap of calories opening it.

Email ThisBlogThis!Share to TwitterShare to FacebookShare to Pinterest
Labels: Show