treading on my heros' shadow

Firstly, you should know that I'm an avid Stephen King fan.
I cried when I found out that I'd just missed out on being in the same city as him a couple of years ago (true. Embarrassing, but true) and that I have all of his books and in fact, have read several of them to pieces. 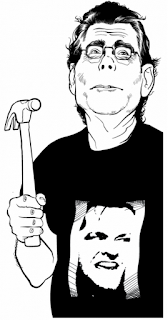 For me to say that I'm not completely rapt in his latest book is tantamount to heresy, for me.

So let me explain.

11.22.63 explores the possibility that someone could travel back in time and stop the assassination of JFK. Which, if you know anything at all about politics, would change the world we live in now and affect millions of people.

The idea is intriguing.

Stephen Kings' masterful storytelling is -- well, masterful. He has a wonderful sense of character, able to draw a picture of someone in a few words.

He doesn't fall into the trap of depicting the past with a rosy tint, describing segregation in a way that's a bit of a slap in the face for this generation -- hard to believe that those things could have been not only accepted, but normal.

And I AM enjoying the story. (about halfway through)

The 'set-up' seemed clumsy. I was reminded constantly that it is, in fact, the set-up, the vehicle that drives the plot. It felt laboured, which for SK is almost unheard of.

He briefly mentions characters from another novel -- one which I've read many, many times -- and uses the wrong Christian name for one, and places anothers' body in the wrong spot.
These breaks in continuity COULD have been as a result of previous time travels or alternate universes or some other plot device, but they feel like mistakes.

I feel awful even writing this. I'm a nothing no-one blogger, no literary genius or even respected reviewer. What I am is a fan. (NOT the Number One Fan, though! God forbid!) And long time fans develop a sense of right and wrong.

And parts of this book feel wrong.

Maybe on the second read-through I'll feel differently. Because, yes, there will be a second (and a third) read through.
It's not THAT wrong!