I am not a geek. Honest.

OK, I admit I would LOVE to go to one of those sci-fi conventions - and yeah I would totally love to wear a costume and a wig and be utterly outrageous -- but I would be found out and lasered into stardust in 30 seconds flat because I don't speak Klingon (tho I can do that Vulcan salute thingy)
But I'm not actually much of a sci-fi fan. Honest.
There are at least 2 Star Wars movies I haven't seen (tho I watched every second of the one Ewan McGregor was in) and I really never got the StarGate thing. I have seen one of the Star Trek movies (as I typed that, I realised I'm really not sure if there are more than one) but only because Fabio and I found ourselves at the movies without kids, and it was Gentlemans' Choice.

But when it comes to the new Dr Who -- YEAH BABY! I'm in that TARDIS, I want a sonic screwdriver, Daleks give me the shudders, I can no longer blink in the presence of an angel statue, and I would run away with Ten in a heartbeat! (Matt Smith is looking like a run-away contender now, too. Poor Fabio.) 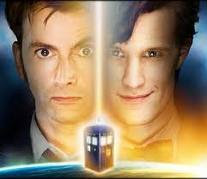