the mirena edition (not for boys)

As many of you know, I've been quite unwell lately.
What actually happened was, I felt dreadful, went to the doctor, had some bloodwork done, and the results were appalling -- my haemoglobin was shockingly low and I had to have an iron transfusion (not the funnest ever way to spend a day, I might add)

This is because I was slowly bleeding to death. Every month, I lose in the first couple of hours what a woman could expect to lose over the course of a whole normal period.
It's something I've spoken about before and I sort of accepted that was just how life was, but as it turns out I was just one heavy bleed away from some (probable) VERY SERIOUS complications. Like possible cardiac arrest.

So, once my iron levels semi-stablised, I had to have a D&C -- again, not massive amounts of fun -- and now, in a last ditch effort to ward off a hysterectomy, I'm having a Mirena IUD fitted in about a week and a half.

You get a prescription, and buy the thing from your chemist, then you take it in to your doctor on Appointment Day (which will be the day before my birthday. Wheee.)
So I did what every computer addict would and Googled MIRENA -- and everything I read said "Don't be alarmed by the size of the box!"
When I picked it up today, I had to laugh. I mean, check this puppy OUT!! 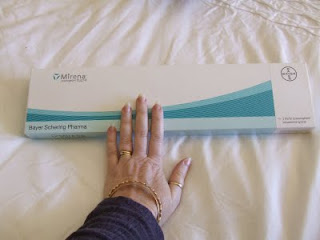 It's a good thing I know that's mostly packaging.