anybody need some mulch?

Clean up continues in the Cassowary Coast region of North Queensland, where Yasi did so much damage in February. 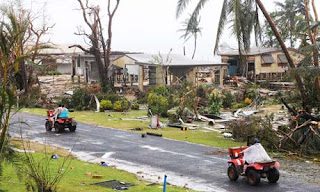 There have been 59,528 truck movements (as of Friday April 8) for all waste removal since Cyclone Yasi.
More than 600,000 cubic metres of waste has been removed.
The bulk of that is green waste (483,000 cubic metres).

This green waste has been processed into 193,300 cubic metres of mulch – enough to fill a football field more than 32m high. It's free to residents.

The sheer number of trucks on the roads, combined with massive rainfall (at least 3 metres of rain so far this year) means the roads are in terrible condition. One 20 km stretch requires major works in about 18 places.
Council estimates around 30% of roads have significant damage, and many more require some work.
An early estimate of the damage bill for roads is more than $50 million.

The constant rain, pretty much daily since Feb., has made work difficult. There's much that can't be completed (or even begun) until the rain stops. Locals are hopeful at the moment -- they've had sun for the last week.

The Council has supplied 137 fully‐furnished bedrooms (in transportable houses, units and caravans) to those whose homes were destroyed or damaged, and to those workers who are helping with the reconstruction effort. More accomodation is arriving.

Council has also provided laundry, toilet and shower facilities for those who don't have their own homes.

Re-building of private homes has not yet begun. A combination of bad weather and slow insurance payouts means there are still many people out of their own homes.

Asbestos has been removed from council and public property, although property owners are responsible for asbestos clean-up on private property. Some of the older houses destroyed by Yasi were made of asbestos and the removal has had to be carried out very carefully.

Cassowary feeding stations have been set up, water courses have to be cleared of debris, and work on damaged council infrastructure is expected to begin soon.

Cases of dengue fever are being reported, and spraying and trapping have begun. (I love the idea of mosquito traps. I picture them as tiny little rabbit-traps, makes me laugh every time)

The foreshore has been cleaned up, trees have been saved or cleared, sand replenishment carried out, and seawalls are being inspected and repaired.

Council has also ordered in extra wheelie bins, to replace those carried away in the cyclone.

Did you know that clean-up was still going on in the area? I wouldn't have either, except that my sister lives there. She tells me that the rainforest is fighting back, with leaves and even flowers appearing, though it will take years before the region looks as beautiful as it did last Christmas.

Money will help, of course.
If you're planning a holiday in the next year or so, won't you consider visiting the Cassowary Coast? Some of the resorts are back to business-as-usual, and others are working hard to re-open as soon as possible.

Email ThisBlogThis!Share to TwitterShare to FacebookShare to Pinterest
Labels: Yasi