I admit it, the ChickChat House is gamer-geeky. All of us but Fabio, who just won't play anything.

I own a Lara Croft figure and I bought Assassins' Creed as a pre-order because it came in a funky box that looks like a medieval stone casket.

And I have the Wii-Fit board and game. Which I use as a weight-loss tool. 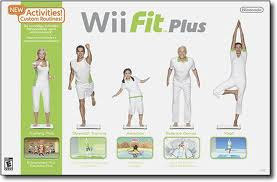 If you haven't seen the Wii-Fit before, it really is good IF you use it. The game (Wii-Fit Plus) takes your weight (ouch!) and lets you set a goal for weight-loss (say, 2 kgs within a month) Then it tracks your progress. And it has a kind of calorie burner too, which tells you how much each exercise will burn and also what the equivalent is in food. 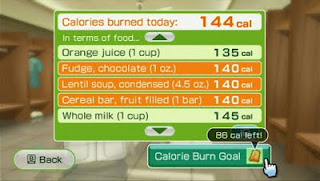 The games themselves are fun.

There are 4 divisions -- you can choose from yoga, balance games, muscle workouts, or cardio, which includes jogging, 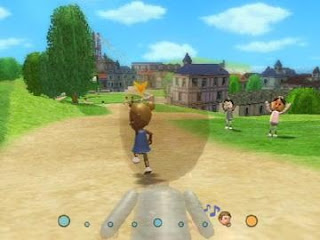 step aerobics, and hula-hooping.
THIS is how I sold Fabio on the idea of investing so much money in a game console....
Of course, I don't look like that, but he still enjoys watching :)

The board also measures your stance. I found I was standing way too far back on my heels, which was one of the reasons why my feet were so sore at the end of the day. I'm training myself to stand properly now.

I know there's been a lot of back-and-forth about whether Wii-Fit will really help you lose weight or not, but I reckon it's like any other exercise machine. If it sits in the corner gathering dust, it's a waste of money, but if it gets you up and moving, then it can only be a good thing.

So what about you? do you play games? own consoles? have you tried the Wii-Fit?