So, a while back I heard about a greyhound who urgently needed a foster home. Like, VERY urgently.

And I offered to take him, provided that he got along with our girl, Paris (AKA The Laziest Dog On Earth.)

Meet Dexter. And yes, he was named after my favourite serial killer (though not by me). 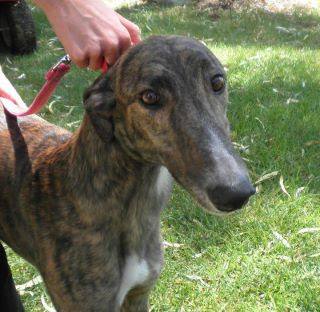 He's a red brindle, with an un-nerving habit of leaning his considerable weight against your knees while simultaneously standing on your foot and he feels like a Clydesdale with ginsu knives for hooves.

But we fell in love with him and now we're adopting him, so while I might be a foster fail, I get the feeling that Dexter doesn't mind that kind of fail at ALL.

If you've never had anything to do with a greyhound, can I just tell you that they are the BEST dogs ever.
They're more like owning a cat -- unless there is an actual cat around, in which case things might get very interesting; mine are NOT cat friendly -- because pretty much all they do all day is sleep.
They'll happily wake up for a pat, or go for a short walk around the block, but if you just wanna watch tv all day they'll join you, no problem.

It's the dog you have when you don't really want a dog.

And now I have two.