Have you seen these little beauties doing the rounds yet? they're the Latest Thing. 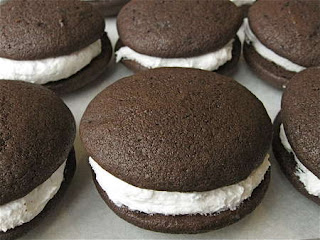 They're Whoopie Pies, and they're DELISH. I know because I've been making them for about *ahem* twenty years or so. Which just goes to show I'm so far ahead of the rest of the world I could technically be it's mother.
I've been wearing a thumb ring and a toe ring since WAY before they became popular too. But I digress.

I found this recipe for Whoopie Pies in an Amish cookbook, and the recipe makes a LOT. Of BIG Pies. It says 15 pies, but that depends on how big you make them.
Also, their 'cream' filling is not so good. So you can substitute sweetened whipped cream, or a marshmallow type fluffy frosting.

* sift the dry goods together
* cream the butter, sugar and vanilla, then add the eggs, 1 at a time
* add flour mix and milk to the butter alternately, mixing between

* use about 1/4 cup of batter for each pie, and drop onto lined baking sheets. They WILL spread a lot.

* bake in a mod oven for about 6 mins, then reverse the baking sheet, and bake for a further 10 mins.

* let stand on the sheet for 2 mins before placing them on a wire rack to cool.

The Pies should be soft, not crispy.

Sandwich a creamy filling between two Pies -- if you want you can roll the edge in 100s and 1000s or sprinkles or something, but they really don't need it.

* try not to eat them all yourself.

Email ThisBlogThis!Share to TwitterShare to FacebookShare to Pinterest
Labels: baking