Today, the Princess' pre-primary class hosted their first school assembly. They were hugely excited (and also a bit nervous) and their theme was Under The Sea. They all dressed as sea critters (scuba divers and surf lifesavers featured large) and sang Three Little Fishies.
The Princess wanted to be a dolphin. My brain went into a tailspin. After some discussion, we settled on a jellyfish. Too easy.
(One mum said her daughter was desperate to be coral, but she couldn't for the life of her think how to make a coral outfit in 24 hours.)

The kids all had a turn at speaking into the microphone, and there wasn't one hesitation. They were magnificent!

I usually hate assemblies, I have to admit. But this school... I LOVE this school! they rock assemblies.
And so do my kids. 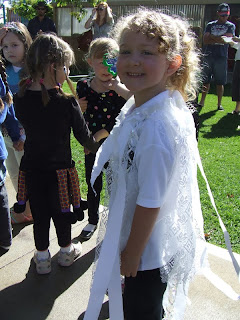