You know when a blowie gets in your house and buzzes around and around, driving you mad? And then it vanishes when you find the fly-spray, and as soon as you give up it re-appears? 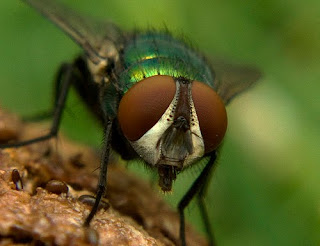 His name is John (really) and this is what happened.

John was (most likely still is) a control freak in a relationship. He was (most likely still is) a carrier of the worst kind of STD -- Sexually Transmitted Debt. He wasn't a kid-friendly guy, had no job, no prospects, no clue how to run a relationship or, indeed, his life.
Understandably, my GF -- let's call her E -- got jack of this and kicked him out. The problem being, John, like a blowie, wouldn't go.

It's hard to put into words just how much he wouldn't go away.

He physically wouldn't leave, and then when he finally did drive off, he kept coming back.
He rang constantly. E was reluctant to answer the phone, so he would ring and ring and ring and ring until she did.
He took the sliding glass door off its' tracks one night and let himself in, which scared the crap out of E, who had thought she was safe in her own home.
He crept around in the dark under my windows, listening in to our conversations.
He followed us around town, mysteriously appearing in the shops we were in.

He even disabled her car in the main street, so she couldn't drive away from him.

Of course, we went to the police, and took out a restraining order. Which he promptly breached, not once, but again and again.

One time, he broke into her house and destroyed my much-loved grandmother clock, which Es' dad had repaired for me.
We went to see his (much more sane) brother, to see if he could help, and John was there. We snapped. I grabbed him but E got her arm over the top of me and slapped him so hard his glasses flew off and folded themselves up in mid-air, landing neatly on the nearby table, as if to say, "Oh, no, I really don't want to see what happens next!"

Finally, the police took him on stalker charges. We appeared in court, and gave evidence, and at last, he was put in jail.
We weren't overly happy about the jail part, but we were thrilled to bits that after all this time, we could finally know exactly where he was, and not have to think about him every minute of the day!

Until the letters started arriving from jail.... he gave my name and address to his CELL-MATE, who was in clink for 6 years and would love to come see me when he got out!!!
I countered that problem by getting married and moving house (thanks, honey)

He drove us completely bat-shit for a while. But I'm so thankful that at no time did he actually hurt us -- and I don't remember being afraid that he would, even at the very height of it all. (although I was very concerned about Cell Mate.)
There are women out there who are living with much worse every day, and while we can laugh about the whole mad episode now, for many, it's not a laughing matter. Ever.
It's never OK to bully, intimidate, hurt or frighten people.
(I'm cool if someone wants to intimidate Cell Mate though)