A little known fact about me is that I am married to a man with, not one, but several supernatural abilities.
True.
(So I guess this is actually a little-known fact about him, not me.... but this is MY blog, dammit. I won't be shoved to the side, even by my super-hero husband.)

Fabio leaves tomorrow for 5 weeks overseas. {Except 5 weeks sounds endless and awful, so I'm saying 'its35days' and hoping it will be slightly less. And although he will be frolicking in the tropics (more or less) it's still winter in BeachTown} so we went wood-cutting.

We found a little-used track deep in the wilderness which had lots of ideal timber lying about, only it was cut-off by a fallen log. Fabio leapt from the HeroMobile and flexed his muscles at that log, and it fairly jumped out of our way.
Not bad.
Then he went to turn the trailer around so we could drive straight out when it was loaded (thus demonstrating some remarkable forethought) and a silly little tree stopped him from making a complete circle, JUST getting in the way of the trailer by an inch or so.
Fabio flexed his muscles once more, and LIFTED the trailer off the ground and moved it sideways. I should point out that the trailer weighs like, half a ton so it was pretty impressive. I went wobbly in the knees with lust admiration nah, definitely lust. 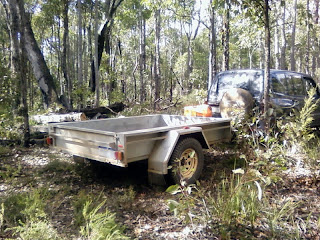 It rained for a moment, but that didn't stop him. He went right on chainsawing logs, and after a minute or so, I saw his head begin to steam.
I AM NOT MAKING THIS UP, Y'ALL.
I got the giggles so bad that by the time I got my act together and got the phone back out to take a pic, he had stopped doing it but I gotta ask, hands up if your husband is so hot his head steams?
Yeah.

Then he did the most impressive thing of all. He sparkled in the sun just like a Cullen. 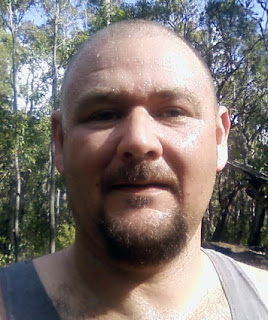 Except better-looking. And not so bitey.