Gone with the wind. And the rain.

Some of my regular readers will remember my Cyclone posts, which you can find here and here and here and then this post-cyclone post with the photos of my poor sisters' house.
Yesterday I rang her to see how the insurance/house-hunting/clean-up is going, and we talked about how the rainforest is just.... gone.
Her home was in the middle of one of the most lush and stunningly beautiful places you could imagine, with a staggering variety of plant and animal life.
See? 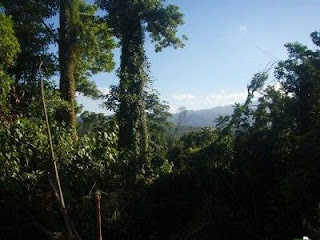 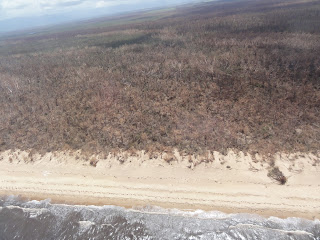 Mile after mile after mile of the forest is gone. There is no shelter, no water, and no food for the native wildlife.    Cassowaries have started roaming to find food, and this puts them in danger of being hit by cars or set upon by dogs.
Some species could be lost altogether. They rely heavily on the kindness of volunteers and donors right now.
You can read more about that here, on Facebook.

The roads have been destroyed. Again. Whole sheets of bitumen lifted up and thrown aside, the roadbase beneath ruined. Drainage pipes under the roads are clogged with debris, have been shifted or broken. Some of the debris comes from broken houses, and some of it is asbestos, requiring specialised attention.

The cost to some local councils will be tens of millions of dollars, just to repair the roads. Again.
Because this happens regularly. Not on such a  grand scale, of course. Yasi put on a real show for the people who live here. But cyclones and flooding are a part of life in North Queensland.

The cost in lost tourism is huge. People come to see the rainforest. They have no reason to come, now. Except for those faithful grey nomads and winter visitors, who travel up every year and who are determined to do so again, to support local industries and help keep people in jobs. Bless you, every one of you.

The cost to locals, in terms of lost businesses and unemployment, is staggering. Crops are gone, produce is gone. Southerners, city people,  laugh over Bob Katter and his passion for banana farmers, but the truth is that's a $400 million industry. Gone.

Yet the locals are getting on with it. Many who were thinking about selling up and moving on before Yasi are now determined to stay, and re-build. Back-packers, hired on to pick fruit before Yasi, are now staying on to help with the clean up. People are helping one another, offering goods and services where needed. They're mostly patient, and appreciative of the many emergency services personnel in the area. They've tolerated the rubber-neckers, the media, and even the politicians.

Just don't mention the flood levy to them.